It's been nearly impossible to avoid the names Yahoo, Marissa Mayer and Tumblr as of late. The $1.1 Billion purchase of Tumblr by Yahoo CEO Marissa Mayer is still big news even two weeks after the purchase, and new articles are still popping up analysing different aspects of the move and what it means for the technological hierarchy that has been established over the last few years. However the one facet of this topic which I haven't seen much written about is the form of recruiting that Yahoo seems to be utilising.

To explain the situation that Marissa Mayer seems to be trying to create at Yahoo we first have to look at one of Yahoos long term rivals, Google. For some people Google is to technology what Mecca is to Islam, a sacred place where many wondrous things have been created. This has helped Google create an enviable feedback loop in terms of recruiting. As the blogger Steve Yegge put it "Smart people go where smart people are, which enables them to launch cool stuff, which attracts more attention...", in other words birds of a feather flock together.

Googles image as a hub of creativity and intellect ensures that they have a huge talent pool to choose from, whenever they decide they need to bring in new blood. People want to work for Google. Therefore they can pick the cream of the crop. Marissa Mayer (a former Google employee) seems to be trying to recreate this phenomenon at Yahoo through acqui-hires. By purchasing interesting start-ups Yahoo is in fact buying the teams that created the companies and not the product itself. By doing this Yahoo is trying to rebrand itself. They are no longer a dinosaur from the portal age of the internet but are now a company who you can sell your start-up to (even if it's close to failure) and join other entrepreneurial souls.

Companies like Stamped, ONtheAIR, Snip.it, Jybe, Astrid, MileWise, GoPollGo and Summly have all been acquired in part for their technology and product but mostly for their teams. Summlys technology for example which was created by 17 year old Nick D'Aloisio, was implemented into Yahoo apps a mere 4 weeks after being purchased. However it is obvious that the acquisition of the 17 year old prodigy was the main reason that Yahoo felt the need to spend $30 Million on the summarization technology. It also highlights another area that Yahoo seems to be attempting to branch into and that's mobile, as the ability to summarize news so it fits on a mobile devices screen is obviously a technology that would hugely benefit Yahoos mobile operations. Facebook is another company that has used acqui-hires to recruit new talent and to branch further into the mobile sector. The social network has closed around 40 deals for other companies and Instragram is the only product that has remained independent. This shows that they too, like Yahoo, are trying to recreate the magic that Google has conjured.

It must be said though that the procurement of Tumblr is different to what Yahoo is hoping to achieve with the other smaller start-ups. Tumblr is being left alone to do what it does best, much like Facebook did with Instagram. Yahoo is going to try their best "not to screw it up" while also aiding in the monetization that the micro-blogging site needs. Tumblr is a way that Yahoo can reach a younger demographic, form new ways of advertising and expand their minimal mobile presence greatly. Therefore Tumblr isn't going to be gutted for its resources, although its data will be gathered and used by Yahoo to help monetize the company. 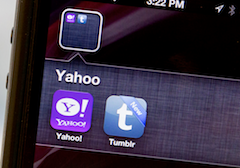 So what are the possible outcomes of this new recruiting strategy by Yahoo? Let's start with the best possible result, they succeed and are viewed as a place where you can work with smart interesting people on cool new projects. They have people begging for the privilege of having their résumé read and can now choose from the upper echelon of  applicants. This leads to the company driving forward and re-establishing itself as a technological juggernaut. Or they could partially succeed with people no longer viewing them as a last resort and will be able to attract some top talent which will aide in the rebranding and further development of the company under the new Marissa Mayer regime. Thus moving the company forward, however not launching them towards the top of the pile in terms of the technological hierarchy. Finally it could fail miserably, much like the companies acquisition of Flickr, with people leaving the companies that have been amassed by the Yahoo spending spree. Hence the company doesn't propel itself forward and remains a throwback to the dawn of the internet with little interest shown by talented individuals in working there.

I for one am routing for the purple company, although I'm not sure why, it may be nostalgia, the underdog effect or the simple fact that I believe that change is good and that disruption is always interesting.