As the effectiveness of job boards continues to decline, top recruiters constantly searching for alternative methods to source candidates. Social media has proven to be the next logical step, with no other online resource providing as much connectivity or personal information. 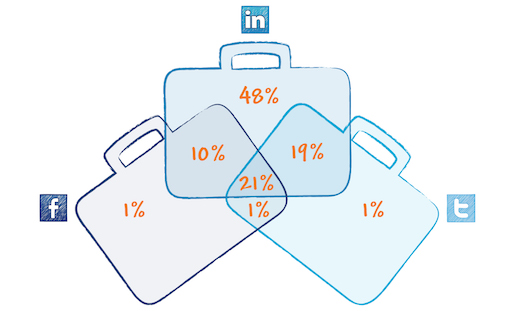 Social media use by recruiters for staffing purposes.

Bullhorn Reach, a company that develops recruiting software and services, recently released their 2012 Social Recruiting Activity Report. The report compiled and analyzed data from over 35,000 Bullhorn Reach users regarding their usage and success of the "Big Three" social media networks for staffing purposes.

To little surprise, the report showed that 48% of recruiters use LinkedIn exclusively, getting 9 times more applications than from Facebook and 3 times more than Twitter. LinkedIn, often billed as the "professional" social network, encourages users to include information in their profiles that are crucial for recruiters, including job history, technical skills, interests, and more. Their well-designed advanced search feature allows you to navigate the site and discover profiles the same way you would a job board like Dice or Monster.

This ideal functionality made LinkedIn the first of the big three social networks to be embraced by recruiters. Bullhorn's data found that 28% of recruiters on LinkedIn, the largest segment, have over 1,000 connections on the site.

While LinkedIn has the most hyperactive recruiter contingent, those on Twitter have the smallest networks. Bullhorn found that 35% of recruiters have between 1-10 followers, with 75% having under 100. The firm cites, however, that these numbers are due to Twitter being a recently adopted medium by the industry.

In fact, the report helps makes a case that Twitter has been the most effective as far as candidate response. Bullhorn's report states that a Twitter follower is three times more likely to apply to a job than a connection on LinkedIn is, and eight times more likely than one on Facebook. Twitter's weak search feature, however, and relative difficulty to build a large network could prove daunting for many recruiters looking to make the jump. It's interesting to note that while TechCrunch reported last November that 1 in 6 job seekers found their job using social media, 78% of those cited Facebook as their source. Despite this, recruiters are joining Facebook at the lowest rate of the Big Three.

With Twitter providing the greatest returns, and LinkedIn seeing the most activity, cross referencing that with the findings in the TechCrunch report raise some good questions: Who's currently looking in the wrong place, the recruiters or the seekers? Can this be remedied? And if not, is there a job hunting service that can provide the appeal of social media's transparency?